In addition to providing fencing instruction, we also provide premier tournament hosting services. It is a matter of civic duty for us, to be able to put our efforts and resources toward hosting some of the best tournaments this region has seen in its history. As a matter of principle, rather than attempting to make profit from tournament hosting, we put all the proceeds back into enhancing the overall experience for all the participants. 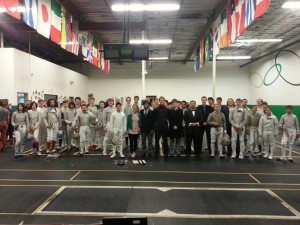 We typically bring in some of the strongest and most honored referees in the country for the local tournaments that we host. Fencing is a sport that is heavily influenced by the level of refereeing skills. It is also a sport that is oftentimes plagued by tournament hosts who do not pay attention to planning and execution it deserves.

We strongly believe that putting extra efforts into building and maintaining a solid infrastructure for local competitions will contribute toward enhancing the quality of fencing in the west coast.